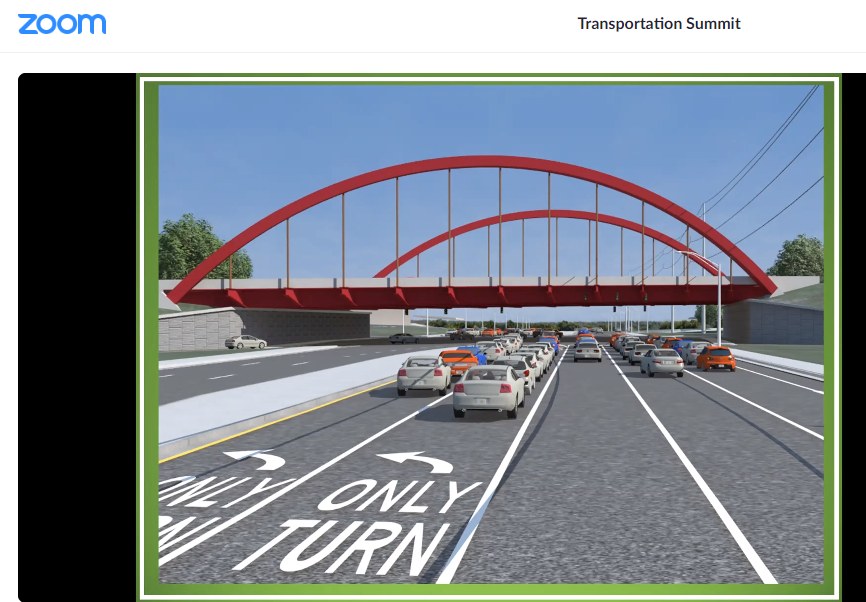 Chamber members were updated on local, state, and federal projects during the 2020 Transportation Summit – held virtually – July 9, and sponsored by McGiffert and Associates, LLC.

Probate Judge Rob Robertson, who chairs the Tuscaloosa County Road Improvement Commission, kicked off the event with an update on infrastructure throughout the county, which has 1,600 miles of roads and 200 bridges to maintain within its borders.

In providing a TCRIC update to attendees, Judge Robertson noted the partnership with the Alabama Department of Transportation had been instrumental in resolving bottlenecks and moving forward.

“The Road Improvement Commission to date has returned over $24 million in tax money to the Tuscaloosa economy,” he said. “That’s a pretty big number.”

Northport Mayor Donna Aaron, who also serves as vice-chair of the Tuscaloosa County Road Improvement Commission, talked about how the TCRIC has benefited the City of Northport. “Northport has benefited, and will continue to benefit from the ongoing intersection improvements at Highway 69 North,” she said. “The planned improvements at Charlie Shirley Road will make the intersection far safer than it has been in years.”

Jarrod Milligan of the City of Tuscaloosa discussed several projects, including the University Boulevard/US 82 overpass bridge replacement, which is a project between the city, The University of Alabama, and ALDOT, and expected to let in the spring of 2021 under an INFRA grant.

The 10th Avenue Roadway Improvement project has been completed, with the contractor currently working on the punch list. A shared use path and new sidewalk has been added, along with lighting and landscaping.

Milligan also gave updates on projects that will prepare the area for future growth, including the Martin Luther King Jr. Boulevard/Jack Warner Parkway project, which is in bridge design and utility coordination phase, and the McWright’s Ferry Road Extension, which is still in the design phase and property acquisition.

Representative Bill Poole, sponsor of the Rebuild Alabama Act, joined attendees to provide updates from the statewide level. In addition to discussing the RAA’s indexing structure, Poole talked about the major projects approved for FY20 resulting from the act. The project in Tuscaloosa approved is the McFarland Boulevard (US 82) from Rice Mine to SR-69 expansion project.

“Investing in infrastructure pays off for generations,” Poole said. “I think it is very significant that we do not let our infrastructure fall further behind that it already has.”

Poole discussed the number of projects underway that will prepare our community for the future. He said he wanted to recognize ALDOT’s role in challenging and frustrating projects, and noted our community finally has a unified voice in prioritized projects. “No other community in the State of Alabama will achieve an equivalent level of transportation infrastructure upgrades during this period,” he said.

Kicking off with the Interstate 59/20 project, Darden talked about the benefits of the Single Point Urban Interchange that is currently under construction along with the curved arch bridge.

Darden said the Lurleen Wallace Boulevard Project, under construction since July 2018, is now 95 percent complete. “This is a very complicated project to construct,” he said. “About 72,000 vehicles per day – the highest traffic count in the West Central Region – use this corridor.”

Wrapping up the summit was Dr. Allen Parrish of the Alabama Transportation Institute, who gave an overview of ATI’s role in collaboration with the State of Alabama and ALDOT.

The 2020 Transportation Summit was presented by McGiffert and Associates, LLC.

Gold Sponsors for the event were Southland Transportation Group and the Tuscaloosa County Commission.